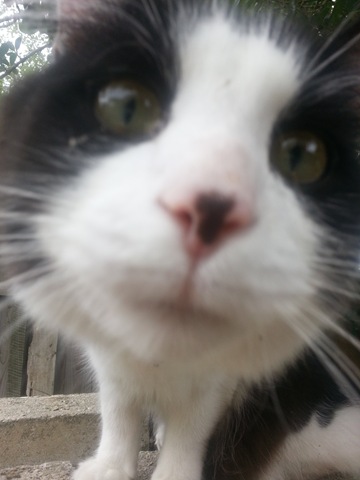 I have been adopted by a new human family, after being temporarily housed elsewhere.

They seem like nice people and are being kind to me.

I say this because I wasn’t impressed when they arrived to pick me up. I knew they had come for me. They carried one of those cardboard cat carriers and tried to coax me in but I was having none of it. I was manhandled, gently, into the box. (They thought a piece of chicken would help the process, hilarious!) but they didn’t know that my previous record of escaping cat boxes was about to be broken. I was out and free in 10 seconds. I ran and hid. I was upset.
Unfortunately, they produced a much more secure one. This had windows and I travelled in air-conditioned comfort and style to my new home for an hour or more, not much chance of finding my way back to my old home then!
I spent the first day hiding under a couch where I refused to come out.
I have since discovered a nice, comfortably stylish bed – my new humans’ bed – where I have discovered a way to ingratiate myself – by purring loudly in their faces at all hours of the night. I don’t know how much longer I can continue this as they seem to be complaining at me – something about losing sleep? The views are nice from the window, I have favourite spots. I should have them eating out of my paw shortly if I play my cards right.

I hope they keep me. I’m beginning to like them.

I think they are on to me though.
I stay close to them – too close I hear them mumble. I stare into their eyes, it unnerves them.”Why does he do that, stare like that?” I hear them mumble.
I don’t like loud noises, “He’s only a baby” I hear them say. A baby gets privileges. I like lazing around – on anything – mostly them, I knead them with my paws – and stare some more, into their faces, close up.
The cat next door is pushing his luck. Up to now we have sat apart, me growling deep in my chest, him just looking. When he poked his nose inside the door however, I launched myself. It was loud. I think I spooked him because this is my patch. He will learn. I can look after myself.

if you’ll excuse me, there’s a bit of bird activity in that tree yonder to investigate and a nice patch of sun on the warm path there near the potted fern, where I have a bird’ eye view of encroaching felines who don’t live here. Wonder what’s on the box tonight?