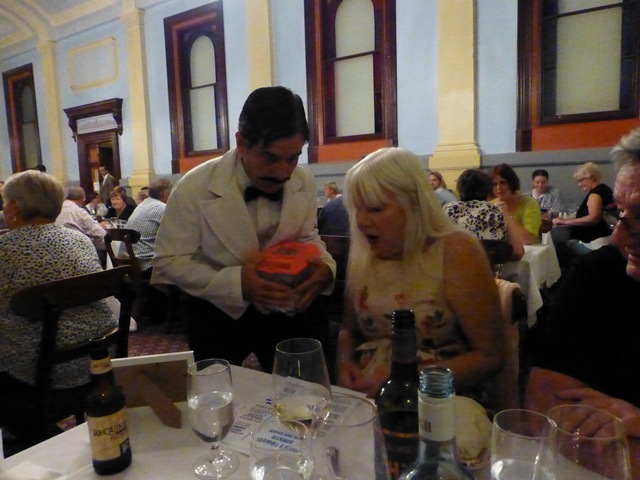 On a cool but balmy Queenscliff evening,

we all ascended the front steps into the historic Vue Grand,

We were accompanied by dozens of similarly frocked up and excited members of the public – well perhaps not similarly attired – our outfits, after all were a cut above the rest – we sisters go back a way in the fashion department and prefer a nice frock to the more casual styles here tonight.

Our husbands were present in this family group of ours and were expecting a good laugh being big fans of the famous tv series “Fawlty Towers – also referred to as “ Farty Towels” or “Flowery Twats” –sorry for that one – seen on a sign out front of the tv Hotel at the beginning of each episode.

We had indulged in a little bubbly from the bar fridge of Jeanette’s very lovely, olde worlde accommodation, Sea View, in Hesse Street, therefore it was a short, pleasant and very quiet walk to the Vue Grand.

One glass of bubbly in the bar very quickly became 3 glasses of bubbly, as we mingled with other dinner guests in the main foyer just in front of the dining room, where discreet glances through the door revealed multiple tables draped in starched and crisp white tablecloths. Waiters circulated, balancing trays with many more flutes of bubbles plus beers, wine, in fact alcohol was flowing like a river in there! Was this intentional I wondered. Were we meant to become uninhibited perhaps in expectation of what was to come, thereby rendering us immune to any embarrassing interaction or involvement from the entertainment.

Well, I was up for it I thought, as I grabbed another something which had bubbles in it from a tray which passed by. I found myself admiring the giant ferns complete with trickling fountain just over there beyond. I had a flashback of being here in another guise – Tour Guide to American tourists. This is the exact spot I lost a tooth – it was like a deja vu. I actually checked that new replacement was still there. I was careful not to knock it on that glass being currently lifted to my lips. The glass with bubbles in it!

The noise levels were high in here and getting higher as more alcohol was imbibed. Luckily our shoes were not of a stiletto variety because there seemed to be a bit of a strain happening in the leg area, plus it was getting harder to balance a champagne flute, a handbag, mobile phone and an intricately patterned apricot shawl with gold thread and exotic fringe which kept sliding off my arm onto the floor. How many drinks had i gulped down out here? I was losing track of time and was pretty sure I was hungry.

There was a titter of laughter behind me. We caught a glimpse of a little man in a white shirt and black trousers who seemed confused and a touch browbeaten – while a bouffant hairdo appeared to pass through the crowd before stopping beside me, accompanied by that ubiquitous laugh “ ahaahaaahaaahaahaa”, Sybil, wife of Basil. There was Manuel, pursued by his boss who was already showing his lack of manners and pushing his way to the front of the crowd. We were corralled there like cattle in a sale yard. There was no escape. It was Basil himself who called out names and table numbers.

Hint: when asked to state if you are present, say “YES”, not “PRESENT”.The response from Basil will be condescending and sarcastic, as you would expect.

The show had begun.

Unfortunately the ambient noise level was now at the acute – or inebriated – level.

Being seated at the far back wall made hearing difficult. At least we weren’t next to the gents toilet. Some of these guys were putting it away like nobody’s business.

Most of the action was centred in the middle of the room, a vast space to project a voice without the use of specialist audio equipment. It was a strain to hear everything being said. Being fans of the tv series helped . We were familiar with the various story-lines.

Manuel, Basil and Sybil Faulty bumbled, stumbled, shouted, condescended, accused and abused their way around the room beginning with the slapstick serving of the bread rolls, flung onto your plate by Manuel himself. After the soup arrived he returned with the cry “ GARNISH!” where a few sprinkles tasting strongly of garlic were tossed unceremoniously, landing on same plate.

The soup was excellent, hot and spicy.

The main course……my choice of eye fillet beef, beautifully presented a la Gordon Ramsay….however I regret this modern day chefs’ inclination to not cook meat all the way through. “ Cut the outside off and eat that” the others said so I did but it was quite brightly pink all the way through. I admit there was a mention of a vegetarian option however with 4 champagnes bubbling through my system, that comment somehow got overlooked. I enjoyed the green beans and Duchess potato very much.

Although we were seated at the far back, the entertainment did interact with us.

Me to Sybil: “ Could I have a Waldorf Salad?”

Sybil : “ We don’t have the ingredients for a Waldorf Salad.

But I can do you a nice Brazilian. It will take 15 minutes”.

Mr. Faulty : “NO, I DONT HAVE A WALDORF SALAD. ITS BEEF,CHICKEN ……AND SOUP”

Me to  Mr. Faulty: “ This meat is still alive, it’s pink inside”

There followed an embarrassing request for a photo. This was not a smooth shoot. Greg took so long focusing, pressing, clicking on various symbols hitherto unknown to him, fumbling and trying to read codes or get the flash to work. I sneaked a glance to the side to see Basil, scowling,arms folded, hand on chin, looking up at the ceiling and mumbling something insulting about the time frame and the waiting.!

The wine kept coming. I was disappointed that after 3 or 4 champagnes, I was only able to gaze longingly at the full bottle of local Scotchmans Hill chardonnay, icy cold and tantalising, on the table before me. My limit was reached. Others around us appeared to have well exceeded theirs!

The noise in the background was now increasing by the minute as laughter took over.

The antics of the actors caused uproar around the tables. It felt so good to laugh out loud.

Manuel sidled up with a soft little request for “nibbles for my hamster “. There followed some hilarious scenes straight out of the tv series finishing with a roaringly funny rendition of the Gestapo high step – to uproarious applause – well deserved.

It was well received due to the fact that only for my sister hand feeding me slivers of her REPLACEMENT BETTER COOKED BEEF akin to a bird regurgitating down the throat of its offspring, I may very well have faded clean away after surviving on 2 green beens and a smallish mound of potato!

The food was delicious – my mistake was not taking the vegetarian option.

The venue, ambience and entertainment was first class.