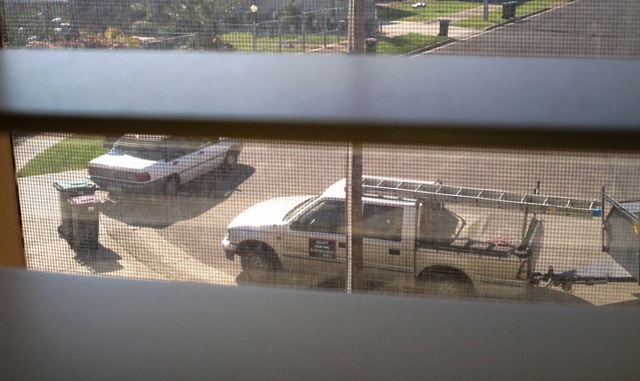 Once the move is complete, the boxes are unpacked, the cobwebs swept out, the previous owners’ rubbish disposed of – hold on – there are still boxes unpacked in that cupboard and I’m sure that cobweb has been there for years housing a large family of daddy-long-legs, not to mention that pile of junk in the shed which isn’t ours, plus all the contents of the kitchen pantry they left in their rush to vacate, which requires large garbage bags to be found to fit all that in– well it goes to show how much work will be ongoing to keep this house looking reasonably Mediterranean!  Those spiders are reluctant to move on. They seem to prefer the shower recess as their preferred room of residence which means you have to have an eagle eye to spot them and a large broom in hand to help them decide to move!

There is also the tragedy of the missing door knocker. The one from Venice. From a back alley in Venice.

Trying to be a local in Pleasantville is not as easy as was anticipated. Being described as a “ people person “ means sod all in this neighbourhood. Those “ people “ skills were to be tested – without a word being said.

Having  purchased and lived in many houses in a lifetime, we were familiar with all the various intricacies of life in the “burbs”or so we thought. The rules of etiquette, like keeping the lawns mowed and grounds tidy, planting lavender and herbs, thereby attracting bees and making a pleasant environment, pruning the roses, trying to keep my love of loud music to a reasonable level which was a complete failure many times over, ( this rule also applied to marital discord as in telling Mr. G to go away and never darken my door again if he knew what was good for him…) putting the bins out etc.

Smiling and being friendly towards ones new neighbours is included here. I didn’t know that this one would not be reciprocated. Situated in the middle of two couples with a combined residence longevity of about 70 years turned out to be a slight disadvantage as we were told it would take that long to gain the lofty title of A LOCAL!  The only encounters we had with them – and still have – was an occasional reluctant hello whilst taking the bins out and a mumbled explanation of what bins go out on what days. Once only. Followed by a similar  once only shared journey to Melbourne  which consisted of brief snatches of conversation, perfectly normal. Herein lies the problem. A rule I forgot.

Never presume -that the trashy vehicles constantly parked out the front, the tradies, the builders, the ones parking  close to your driveway leaving great clods of dirt there for you to step in and transfer inside, or especially that one who moves your bins to another location to get his van in, what cheek, so you have to chase him and ask if he could not do that, because then they are hard for the council truck to access and that one who brings down the tone of the street just by parking there. So I’m fussy about street ambience! Next time someone parks there I said,I would block them out by placing our bins in such a way that they would be slightly inconvenienced and therefore get the message. The very next morning, there appeared a regular offending vehicle, so out we went to place the 2 rubbish bins – not on the nature strip – but in front and rear of the car – to slightly inconvenience them. It was a Friday or Saturday, the bins being emptied on Sunday.

Life continued as we slowly made the long difficult transition to becoming a local.

I was lulled into a false sense, the neighbourhood was quiet, too quiet. Until one mild Sunday not long after.

I answered the door to not one, but two, council officers, resplendent in fluoro vests to make them look official and more important than they deserved. Council officer no. 1, who was obviously the spokesperson, informed me with a deadpan smile that there had been “ a complaint “. Council officer no. 2 looked decidedly uncomfortable. It was evident he was in training and would have preferred to be elsewhere especially when he saw the look on my face. Initially a look of disbelief. Why would a tradie bother to complain about having to move a couple of bins? I had been doing that quite a few times myself. It was mildly inconvenient but not complaint-worthy. That disbelief soon turned to horror and a sick feeling. Unfortunately I had not followed my own rule of not presuming.

The vehicle in question belonged to one of the neighbour couples relatives, who was visiting – it all fell into place.

What a cock-up. On moving in day, my gaze I recall had extended outside, taking in the street poles, lighting and our letterbox, itself the size of a small house, before coming to rest on the cameras attached to the house on one side, one of which pointed directly at our driveway. Any person from the Mediterranean residence so identified, putting their rubbish bin out, not on the regulatory nature strip area as required by local law, before sneaking guiltily off inside, would be clearly viewed by the spy at the end of the camera, probably sitting in front of the telly saying “ ooo look there dear at those new people, how awful, look where they’re putting their bins. I must push the red button which connects directly to council by-laws officers so they can get onto it and show those newbies a thing or two “ or words to that effect. When you realise that most of your outdoor visits to driveway, garden, letterbox, or yes, nature strip are being filmed, something strange occurs. You don’t care. It brings out some exhibitionist tendencies you thought were forgotten. Like dancing in the street, singing, wearing purple tights or fishnets, short skirts even, or giving little hand signals usually associated with road rage incidents. Alternatively, it can create discomfort as you go about your private business.

Quietness descended again, except for the now indiscreet huddles in the street, the whispers and quick glances to our nature strip and loud exclamation clearly heard inside the house, by me, the guilty party, by one to the other, “ Oh, I didn’t think you put your bin there, I thought YOU PUT IT ON THE ROADWAY!” Another huddle. More street gossip.

We don’t know who made the call. It was obvious however. Those Council officers got off lightly that day. I was regaled with various rules and times and dates and regulations, all of which I know, the police were mentioned as I had apparently blocked the road. Officer no.2 took a step back as my body language took a turn for the worst but I remained calm and polite. I thanked them for wasting my time. If there was to be a next time – and there was – I would not be going quietly.

Our first Christmas in the house, I wrapped a couple of little puddings in tinsel, quite delicious and exclusive little puddings. They were placed  carefully in boxes with coloured ribbons, in my personal calligraphic handwriting saying “ Merry Christmas “. Mr. G placed them gently in both letterboxes that night. Maybe not so gently he mentioned later. After all it had turned dark and hard to see at the time.  It was a little gesture of peace and goodwill for what was a minor, or so I thought, mis-judgement.

The neighbours whose car was involved by causing a ” blockage ” as we were informed, never spoke or looked our way again. Not even to acknowledge those little exclusive delights shoved through their letter box. For a person like me who is  familiar with meeting and greeting people from all walks of life and far flung corners of the world, this was a great disappointment.

I finally realised that this wasnt about me, this was about them. I stopped blaming myself . This was about being traditional and unaccepting on their part. Our fantastic new house maybe had a past – wild parties, Lamborginis, rowdy tenants. It didn’t matter that we were from a professional working background, loved the city life, loved the privacy we had here. These people were entrenched in the old ways, we were as different to them as chalk is to cheese and now I realised how cherished was that difference to me. I continued on with the business in hand, waving to everyone, smiling, engaging. When I walk along the main street now, there are smiles and greetings, sometimes from complete strangers, all the shop owners know my name and I know theirs. I drink their coffee, buy their products and make myself known. I am a local! I have arrived!

Someday very soon, my dream of finally bringing my personal vision of private tours to this place I call home, will come to fruition.

There was one more chapter to this saga. It was to teach  me more about the diverse nature of human beings . How vast are our differences – and how, if you concentrate really hard, that long thought of special lost doorknocker will manifest and re-appear, just when you were beginning to think all was lost.