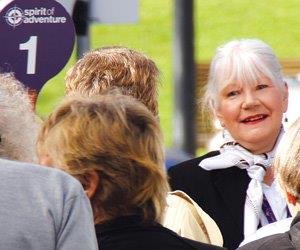 Fortunately, most tour experiences are fantastic and go smoothly.

This particular one was not one of those.

It’s a long, long journey along The Great Ocean Road, from start to finish. It was a learning experience, my first Great Ocean Road as the Tour Guide, not the tourist.
Tour guides ensure good times. December 30 2011
JOANNA CARSON – Bellarine Times

Showing tourists around our beautiful region isn’t as easy as you might think, says a Bellarine-based professional tour guide.

Pauline Campbell was in charge of a bus load of British tourists from the cruise liner Spirit of Adventure, which anchored off Geelong last week.

With very little notice of what the itinerary was going to be, Mrs Campbell was responsible for showcasing the Great Ocean Road to its best advantage, and ensuring the visitors were still in good spirits ten hours later when they met their ship in Melbourne.

Describing tour guiding as an art and sometimes quite hard work, Mrs Campbell nevertheless loves the job so much she and husband Greg have started a tour business on the Bellarine. She said when they moved to Portarlington from Melbourne they soon felt a need to show off all their new home had to offer.

“We didn’t move here to do this, but there aren’t any professional tour guides on the Bellarine as far as I know and it’s the ideal place,” she said.
“My job is to totally entertain, whether it be for two or 10 hours. That’s the goal – that they all come back having had a little experience of Victoria.”

When the cruise ship came in, Mrs Campbell guided on behalf of Cruise Guides Australia, and said it was her first cruise tour from Geelong. However, she is also very keen to create tours for locals and their visitors, around local attractions such as wineries and also into Melbourne, where she first learned the craft of guiding.

She believes there are still lots of treasures that Geelong locals may not yet have come across, such as Melbourne city’s mysterious laneways which are on her www.WalkingMelbourneTours.com.au website.

She has planned a walking tour around this ‘darker’ side of the city of Melbourne which ends with the famous high tea at the Hotel Windsor which may be available soon..