The moving van or how not to hire a truck 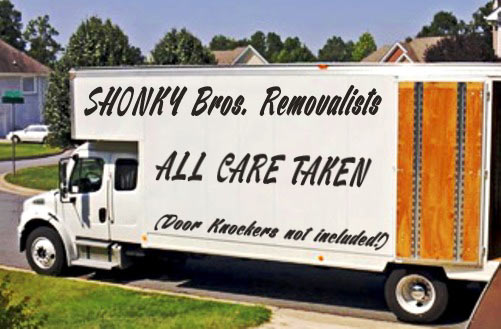 Due to the aforementioned Mr. M  ( fully licenced to drive an 18 ton furniture van and who had never had an accident) one more little worry was eliminated as the move progressed into the final stages.

When all the rooms were emptied in the Melbourne lodgings, how small and sad everything looked.

It now echoed so I wandered in and out of every room calling out things – like “ Adieu”, so long, HELLO!  “ WHERE IS MY DOOR KNOCKER” just to test the effect. There were no regrets, a huge new adventure was about to begin.

The rain seemed to stop somehow, magically, on that final loading and unloading, only to continue with a vengeance after. One more trip and the hired van could be returned.

At the Company hire office I had handed over my card details. At the very last moment, we were asked if we wanted “ extra insurance cover”, just in case she said, if anything happened she said, “ you would be covered”. We accepted.

Mr. M, driver, decided to take the van home to his place of residence, as darkness descended over inner city Melbourne and return it in the morning.

He duly returned it with the addition of a few scratches and a rather obvious dent along the roof. Apparently a large tree had appeared on his naturestrip, looming out of the dark. “ Didn’t see it.”

However, we were covered, until we arrived to finalise the bill, to discover that the “ cover “ was for “ motor vehicle collision “ only – not running into a tree…which wasn’t there….in the dark. Funny, she didn’t mention that bit.

There was a distinct chill in the air. Things went into a downhill slide. Instead of the quoted $300, the grand sum of $3,000 was ripped from my account. We had been ripped off.

As it was not a “ vehicle collision “ my hard earned money now went to funding the minor scratch and dent – plus the re-painting and all other repairs, the tune-up, the cut and polish, re-registration, road worthy, new tyres – in fact replacement of a whole vehicle. Husband – Mr. G – walked out, pale and angry, leaving me to calmly tell the manager exactly what I thought of him and his company and exactly where he could put his “ extra insurance “.

I hope he put it somewhere that really “ HURTS”.

Hint: make sure your selected DEBIT Card account has only the minimum funds quoted e.g $300.