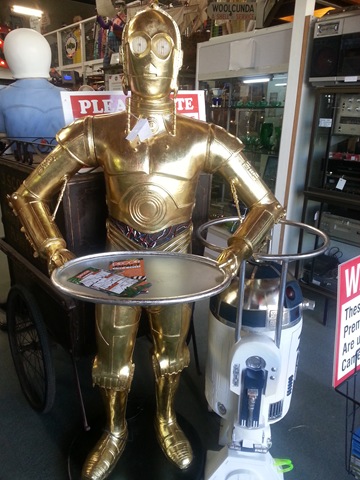 With these words  we are transported back to a galaxy far, far away…..

In 1977, I remember sitting in a darkened theatre, with the kids crammed in either side, clutching their little toy starships and droids, an X-fighter and a tiny R2D2, waiting for the start of the first Star Wars movie.

There was a queue outside and much excitement was evident on all the faces, especially mine. There had been so much build up to this special day in movie history.

We were not disappointed.

The R2D2 was dropped under the seat and we had to leave without it at the end, much to our dismay. However, R2D2, C3PO, Han Solo, Luke Skywalker,Princess Leia and Chewbacca were forever imprinted on us, inside our hearts and minds for all time. Other movies continue to come and go and we forget just a little bit, about our friends out in the galaxy, until we are re-united once again.

Star Wars The Force Awakens re-unites those favourite characters we know so well. With Harrison Ford’s ( Han Solo) memorable line, “ Chewy we’re home “ as they both step inside the Millennium Falcon, we are literally thrown back into the story, over 30 years after Return of the Jedi and we feel exactly the same – we’re back on home ground and buckling our seat belts for another incredible ride.

There are new characters, a Storm Trooper who rejects the dark side ( Finn), a resistance fighter pilot ( Poe Dameron )and a feisty girl ( Rey )who scavenges marooned wrecks in the deserts for their parts to sell for food to survive.

She is anxiously awaiting her parents return, after being forcefully separated as a child. I saw vague similarities to the Harry Potter characters. However, the question remains – who is she?

Kylo Ren is the evil one, successor to Darth Vader.

There are references throughout to the previous movies.  A glimpse of an ancient, dusty, eroded mask – Darth Vader?   Han Solo’s famous quip “ I have a bad feeling about this “. Memories of a young Luke Skywalker chasing womp rats through those canyons. A new rolling droid BB-8 takes over from R2D2, who has powered down since the disappearance of Luke. He holds a map to Luke’s location,as did R2D2 all those years ago. When R2 powers up eventually, we know that Luke is close.

This episode is obviously more technologically advanced. The fight scenes are less stylised and more realistic. It is serious now. The battle with the light sabers is momentous and important to the plot as the power switches from one to another.

Star Wars wouldn’t be the same without the humour – the one-liners, the looks, the audience laughed out loud at all the right places. I heard a rumour that Daniel Craig ( aka James Bond ) was in a brief scene as a Storm Trooper, so began a scrutinising of all Storm Troopers. He had denied this in an interview, saying why would he bother being an extra in a movie while he was busy filming Spectre!

This Storm Trooper spoke. We turned to each other and said “ That’s him!” It was a very funny line, only a Bond fan would pick it up. The Bond fans laughed.

This is the episode which is filled with emotion. A tear, threatened to appear and roll slowly, unseen, down my cheek. The meeting up of Han Solo and General Leia. Not much dialog but there was no need. So much time elapsed and yet nothing had changed between them. That tear re-appeared at the end. No words were spoken by Luke Skywalker. It was all on his face. Not a sound from the audience. Even the kids were silent.

I think the adventures will continue.  I hope Yoda returns. It was a great movie.

May The Force Be With You.