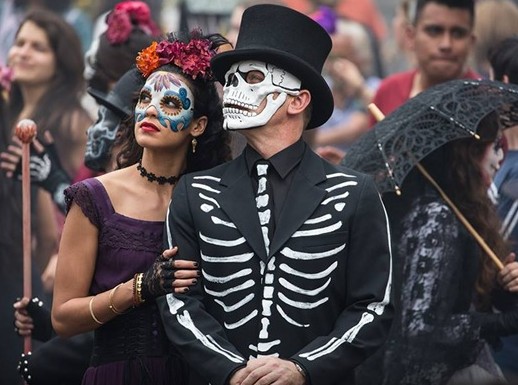 and with those words, MI6 Quartermaster ( Q ) Ben Whishaw, sets up his persona for the duration of this latest James Bond blockbuster, SPECTRE.

There is much more to him than lovable Desmond Llewelyn’s portrayal through all the previous Bond movies.

He’s unknowable and a bit mysterious.

Spectre doesn’t disappoint. There was a tremendous amount of expectation. Was is to be better than Skyfall?

Daniel Craig is the charismatic, action man with a licence to kill. After all it is his occupation, as he states. He infiltrates Spectre this time.

The opening scene of Spectre in Mexico City during The Festival of the Dead reminded me of the carnival scene in Rio ( Moonraker with Roger Moore) – and “ Jaws “ in the creepy clown suit, coming down the alleyway, head wobbling menacingly towards Bond’s female companion. I wanted more, more carnival, more costumes, more minutes on the screen. No clowns were spotted however. There were skeletons en masse and Bond’s amazing skull mask to make up for it.

The action takes over early and continues throughout. It is exhausting. The fight scenes are so realistic, you want to duck. It’s not surprising there were injuries. Could not pick the stunt doubles at all.  Yes, there is a train scene – inside the carriage this time. Reminded me again of another train fight, in From Russia With Love, with Sean Connery.

There is tension between Bond and the new” M “ ( Ralph Fiennes ) who goes in to bat for retaining the 00 division, against “ C “, ( Andrew Scott ) an advocate for digital surveillance, rather than what is seen as the outdated 00’s. There’s humour with the “ C “ word – titters from the audience. As M tells him in one of the final moments of his life – C stands for…….careless. Perfect.

M, Q, Moneypenny ( Naomi Harris ) and Chief of Staff Tanner ( Rory Kinnear ) all pull together in the end, their loyalty to Bond obvious as their characters emerge from Skyfall.

There are hints at previous Bond movie lines, pictures on the wall of characters, good and bad. They are all so familiar. Games are played, torture is provided and endured –  and a new  villain emerges. Ernst Stavro Blofeld. Or is it? The super villain, with the facial scar, stroking the white, fluffy cat.. Christoph Waltz, the Spectre evil one. Special Executive for Counter Intelligence, Terrorism, Revenge and Extortion. There are memories emerging throughout this movie.

The car chase in Rome was short and I felt didn’t do justice compared with others. The Aston Martin DB10 of course and the original makes an appearance also, as it did in Skyfall.

What was lacking was the connection between Bond and Madeleine Swan, daughter of Mr. White and Daniel Craig’s romantic interest. There were no “ moments “, no shower scenes, no casino with glamorous women in beautiful gowns, no fantastically inappropriate names – like Onatop, or Christmas Jones, or Severigne with gun strapped to her thigh. Has the action taken precedence this time around? No-one was trying it seemed. I wanted moments! Bond moments.

My bet was on Lucia Sciarra ( Monica Bellucci) the 50 year old who captured the look during her short scenes, elegant, beautiful, in mourning. She epitomises all that is a Bond girl, the glamour, exquisite clothes, lingering looks – what was in fact missing with Lea Seydoux as Madeleine Swan.

I hope Daniel Craig returns for another round. We can’t imagine a new Bond. Whoever he is, he will return and I will be there.