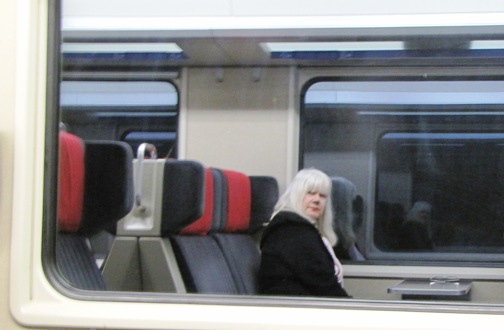 The Metro train journey from Melbourne’s west through to Flinders Street is usually a half hour trip.

On this occasion, it took longer, delays due to Anzac Day crowds or other assorted breaks in schedule – like the pilfering of copper by crooks at signal stations, hence – no signals!

In need of a spot of solitude, weary in mind and body after a fruitful visit with some very active and gorgeous small children., I slipped into a window seat in the almost empty carriage and prepared for some serious window gazing.

the doors slid open at Altona station. I felt her presence before I saw her.

She paused – checking out the seats, the empty seats in this almost empty carriage, with its vast, open spaces. My concentration on the industrial landscapes now flashing by my private window increased as she came nearer. Ignoring her would be a sufficient disincentive and I silently mouthed the words I didn’t want to hear from some unknown person about to invade my personal space.

“ Oh, I’ll sit here!” Yes, right beside me, there she appeared, dragging her shopping trolley, one of those mobile nana type things on wheels, grey, with a lid, although they come in all sorts of trendy colours now, from hot pink to leopard print – but not this one, the grey one with the lid. For one crazy, brief moment I debated whether to climb over her and exit at the next station. I decided the gentle art of ignoring someone as if they don’t exist would suffice.

It didn’t work, as in the first 30 seconds after her bottom hit the seat, the seat next to me, in the almost empty carriage, I learned that she was a suburban Mum ( not that there’s anything wrong with that), she was baking for the school fete and was heading into town to “ get those special tools.. you know the ones?…..No I didn’t.

“ Do you know that Glad don’t make baking paper any more?” My eyebrows moved up in a non-genuine and non-interested manner. “ No I didn’t I mumbled. She continued her life story.

She had to get back to Altona by three to pick the kids up from school or “ The three year old will fret”. The fete committee asked her to supply more of her baked goods again this year. She waited expectantly for my overwhelmingly interested reply. “ Fair enough” I mumbled.

Apparently answering in monosyllables didn’t work either, nor did raising my eyebrows without speaking so I tried going back to gazing in a most interested manner out the window at passing roadworks and endless vistas of dry, open paddocks which reminded me of the wild west without the tumbleweeds. Past the shiny new station Williams Landing we flew– the shiny new but ugly and isolated station right then. Pretty sure this newfound concentration would surely discourage her from continuing – I realised it was not to be. I had to face her head on.

I slowly turned my head to face, up close, that inquisitive gaze of hers and cringed a little inside as I spoke the words..” What do you bake?”

Dear reader, by the time that train bound for Flinders Street, rattled and rolled towards its final destination, with fitful stops and starts, I realised with horror that I was now educated on preparing the following array of delicious baked goods! I felt I was up to the task.

1. Jam Tarts. Roll the dough into balls and ‘crimp’ the edges, creating the base. Spoon in jam ( from the supermarket) don’t make the jam yourself as it tends to be runny?! Bake 10-15mins.

2. Yo-yos with vanilla custard icing ( like the ones you see in glass jars in trendy cafes!) Very time consuming.

3. Iced VoVos. Like Arnotts make, using biscuit base, marshmallow, jam and coconut. However, don’t make your own marshmallow a la Master Chef  (Me: THEY MAKE THEIR OWN MARSHMALLOW??) because it’s too messy (Me: You don’t say!) Buy your own marshmallows …she said. In bulk..when they’re on special…$2 a bag. Coles in Elizabeth Street doesn’t have specials.

4. Chocolate almond log. Surprisingly simple.I was really getting the hang of it now! Hint: mix your chocolate with copha, it runs easier to work with – and the copha helps it set. Don’t drizzle the melted chocolate from a piping bag along the top of the log – use the side blade of a knife to edge it on. “ do you like chocolate “ “ Is the Pope Catholic”?

The conversation had been based entirely on baking up to now and my savvy and consistent travelling buddy now honed in to my personal reasons for travel today – or my general travel itinerary. How low I had let my guard down was now evident as she proceeded about her age ( 46 ), how she remembered seeing Brian Mannix at Festival Hall. I was on a roll now as we discussed the serious issues  of the old building, how forlorn it now looked as we went past and how embarrassing that The Beatles performed there because that’s all we had to offer then.

After a long pause, where we both reminisced of youthful days passed, I was suddenly jolted out of my reverie on The Beatles and assorted other rock stars with the question I knew must be coming, the one I dreaded with every fibre of my being. A light perspiration appeared on my brow as I awaited the question.

A deathly silence ensued. She may as well have asked “ do you skin rabbits alive” or do you flail and then eat small children”- such was the seriously expectant look she gave me. Keeping unbroken eye contact for all of 3 seconds, I replied very quietly and sincerely – “ No. I don’t, I don’t bake”. Cringeworthy.

Well, I do quite a nice pumpkin pie and I can put together an attractive bunch of chocolate crackles ( using copha!), both of which require little or no actual baking, so to speak. She nodded, sympathetically I thought. I felt this was the end.

I was now passe as she spotted another potential travel companion sitting opposite. Within 5 seconds, she had discovered her new friend’s travel itinerary and as those doors slid open on one of the longest, most educational train journeys in metro Melbourne, she was up and hauling the little grey trolley, with lid, onto the platform, where she blended amongst the crowds on a personal journey, rushing to get that darn baking paper. I felt strangely re-energised and yet slightly deflated at the same time.

I hope she made it back to pick the kids up because the younger one will fret if she’s late.

Postscript. Be careful who you open up to. Only a few people actually care. The rest are just curious.