The rules of moving house part 2 – The Move. 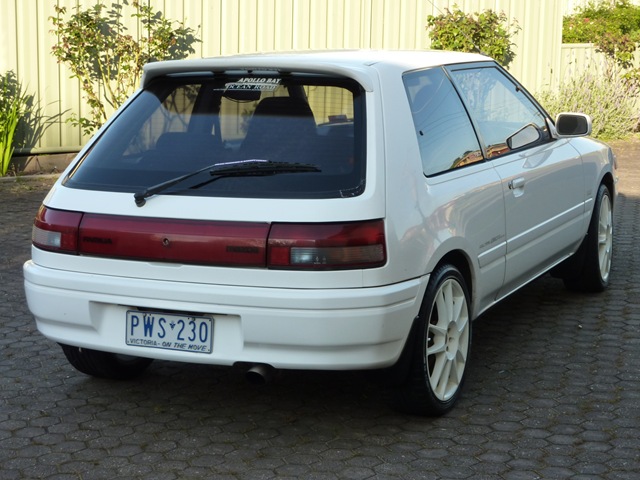 The little white Mazda Familia hatchback, filled to capacity with the last of our breakable, precious items shuddered and swayed yet kept her stability on the slick, wet Westgate freeway.

This car was fortunately built to handle such treacherous conditions, being full four wheel drive and turbocharged rally bred.

Water ran down the windows creating such a film across the windscreen, the wipers did little to clear it, making visibility almost nil. An occasional flash of lightning illuminated the darkening freeway with an accompanying rumble of thunder, causing driver and passenger to jump in their seats. There was no other sound, only the pounding of the rain on all surfaces and the thump thump of the wiper blades as they attempted to clear a pathway. The pale headlights of other vehicles were barely visible now, it seemed there was only the white car.

For a brief moment, the rain seemed to pause – however the dark clouds overhead appeared to meld together, blocking out the daylight, creating an ominous sky of black – another sound assailed the ears of those inside.

Hailstones  rained down on the white car. Everything seemed to slow, the only sound, the continuous sound of those ice balls hitting the roof, the bonnet,sliding across the windscreen. Other vehicles were pulling over where and when possible, their headlights weakly cutting through the gloom. An overpass across the road became visible for a brief second. The car stopped underneath to escape. The sound continued, loud and frightening, now from golfball sized rocks of ice, but the hail was hitting the barrier overhead and the little white car and those inside were safe.

Dramatic as it may sound, this was moving day 2010, the breaking of a drought and the worst hailstorm to hit Melbourne in over a decade.

Our moving van disappeared ahead of us into the hail causing an anxious few minutes until contact was made.

Which brings to mind RULE NUMBER 1.

DO NOT – I repeat – DO NOT – UNDER ANY FRIENDLY BROTHERLY HELPFUL FAMILY OFFERRING TO HELP OR SAVE MONEY IT’L BE A BREEZE SCENARIO DONT WASTE YOUR MONEY     -– HIRE YOUR OWN VAN AND/OR USE A FAMILY MEMBER TO DRIVE SAID VAN – no matter what he says.

He will say “ I have never had an accident “