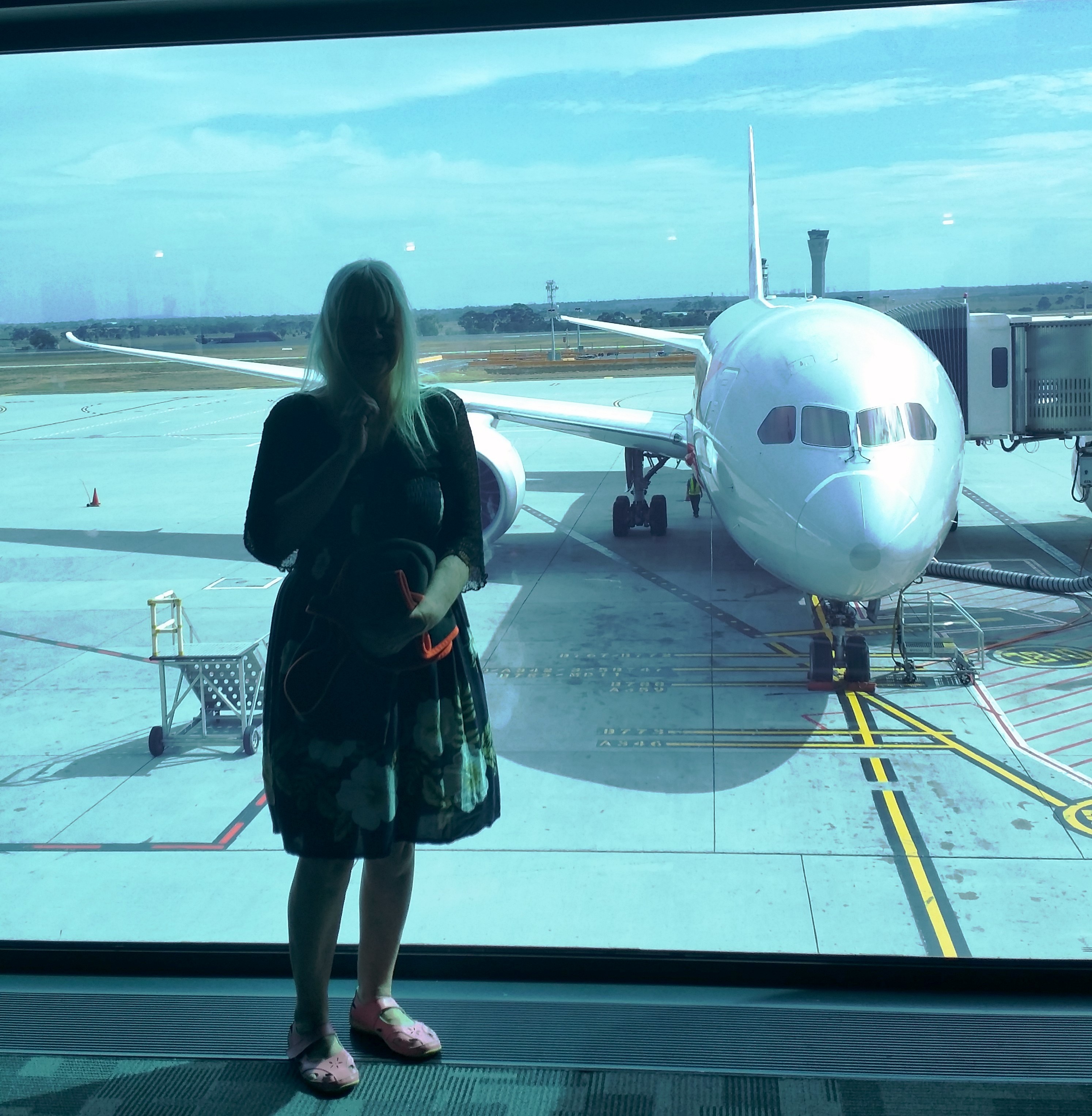 Travelling is quite stressful. On the move constantly.

Carrying important documents and foreign cash across the globe, protecting them via various means and a load of paranoia, lest they vanish from your sight.

At Melbourne Airport, the endless lines to check-in, then more queuing for your worldly possessions to be x-rayed, scrutinised, followed by yourself, who, by now is thinking of a nice crisp chardonnay and a sit down! There goes my brightly coloured pink and green suitcase with Aboriginal print disappearing out of sight to be manhandled onboard our aircraft. It has travelled through many countries with me.
We managed to avoid the body scanner, you know the one,the one which they say is in the form of a stick figure so those staff members operating it don’t get to see that you are not wearing your best underwear.or worse, that you have been watching what you eat because they may be looking at your last meal sitting there.

We prefer the stick figure configuration! Who doesn’t? Thankfully we were waved to the walk through one. Much less intrusive. I overheard an official sounding man accosting a lone female behind us, asking her questions which required her to cough up her entire life story. Why? where? How? Who? etc. ” Security reasons.” The same intimidating individual who peered and pondered Greg’s passport photo with an eagle eye, flipping pages smartly, looking at him with evident suspicion while I strolled past them, no holdups. ” Pain in the arse .” Greg muttered. Others were hauled aside for ” explosives searches.”
I found myself a stiff drink and we proceeded to our gate.

Through the window, there she was, our Boeing Dreamliner. This was it. We made it. I gazed at her sleek lines …with alarm. What was that on the nose. Was that DUCT TAPE wrapped around the nose cone? At this close stage of departure, seeing that did not inspire confidence.I was sure there was nothing to worry about however, as being a long and loyal former employee of a once great domestic airline, an employee who handled urgent service bulletins for instant and prompt despatch to relevant Engineers, I was one of the first to see all the things that can and do go ” unusable”. For instance – coffee pots, aircon units, tyres, important replacement nuts and bolts, crucial repairwork ordered by Boeing direct from the United States, anything and everything – including, no doubt, NOSE CONES – HOW TO PERFORM A QUICK PATCH UP JOB before take-off and reaching an altitude of 40.000ft over ten and a half hours duration. To Honolulu.
Must have worked as we arrived safely – and early!

Jetstar and crew are excellent. Seated as we were, back row, we were able to easily access toilets, both toilets – and the cabin crew any time. The male attendants were very helpful and obliging, chatting to us as we settled in, pointing out the entertainment units, for which we had pre-paid – and bringing me snacks and white wine – for which we had to pay. Note to self : the ” Tapas ” plate is not a plate, just a tiny packet of reasonably high quality olives, accompanied by an equally miniscule pack of cheese and bikkies. Open mouth and they all fit in! Gone. I look for my wine. It is there, in a little plastic bottle with a little plastic glass to hold the lot in. I savour it.
I do experience a little anxiety and fear of flying on take-off, exciting as it is. Being able to watch movies and eat certainly helps. Holding hands also helps but make sure you have the right hand. Your partner’s hand, not the next passenger in the seat!

The proximity to the back toilets proved to be a bonus – with negative overtones.
On the taxi out to the runway, nerves now aflutter, a PA announcement informed us of the rules entering the USA. US Border Security insists that on all aircraft entering the United States, there be NO CONGREGATING, meaning by groups of passengers, in aisles or around lavatories. In hordes. Mainly the lavatories behind us as we were in the very last row in the tail section.With aforementioned adjoining toilet.
We chose this seating arrangement – TO GET AWAY FROM EVERYONE.
Unfortunately, everyone wanted to CONGREGATE. This included some poor deluded souls to consider this region the ideal spot to lumber up and perform a number of tricky stretches and awkward leg bending! I also noticed many people making frequent trips down the aisles, clutching various hues of water bottle, which they kept re-filling. courtesy of the obliging flight attendants. The galley was right behind us.I imagine my lack of a colourful water bottle replenishment reduced my need to visit the lavatory, thus resulting in my apparent dehydration.
Speaking of toilets/lavatories and CONGREGATING.
One very stuck-up, officious, businessy looking, smartly dressed female, felt it her duty to hold up a male attendant from his duties ( I wanted another drink?) to loudly proclaim to all and sundry ( mainly those others CONGREGATING around the loo) plus me, that her daughter was also a flight attendant – with Virgin. This she announced proudly, allowed her 33 flights per year – a good majority of those in Business Class. In my head I spoke to her ” Well, lady, you aint in Business Class now, are you? No. You are sharing space with the lowly peasants in cattle class Economy aren’t you. Must be a right come down for you. As a matter of fact, I believe you are CONGREGATING? I glared across at her with what I hoped was a stony and downright evil look. Her conversation was beginning to grate.
Sitting quietly in my private back row seat, I popped up and stated loudly,  over the aircraft noise, well perhaps not loudly but forcefully

” The PA announced there was to be NO CONGREGATING….and yet …here you all are!” Heads turned to glance somewhere in my direction. ” I’m waiting in line for the toilet!” she said. My favourite male Flight Attendant approached, breaking up the moment by informing this loitering at the toilets group ” You can’t stay here. You are CONGREGATING?!” Thank you. They reluctantly dispersed. All was quiet again.
Why people have to hang around toilets on planes, doing aerobic exercises or pushups while describing their boring lives out loud to all, mainly me, within earshot, while others, mainly me, are trying to watch brand new episodes of The Big Bang Theory, I will never know!

There occurred another interesting diversion in the proceedings. A woman came unsteadily down the aisle towards us in our back row domain.Instead of continuing straight to the toilet, she came to an abrupt halt, in front of the Emergency Exit Door, looking decidedly furtive and slightly confused.I think the average traveller would have difficulty figuring out the cryptic signs, arrows and flashing lights, especially the arrow pointing to the pull down handle – which opens the door. It would be a nightmare scenario if that door opened in flight. We both swear she was doing a thorough inspection for that very purpose! Or – she mistook this door for the toilet! How many tiny wines would you have to consume?! She peered, peered closer, scratched her head, looked suspiciously around. Looked at the toilet door right in front of her and moved closer for a more detailed inspection, so it seemed, of the coded clues, until with a backward glance or two, she turned and slunk off from whence she came! Amazing to watch that was!

No sooner had she gone, then ” Mr. Ethnic Older Gentleman ” emerged from the same direction, grabbed hold of the very same door handle on the very same Exit and proceeded to perform some complicated and robust leg stretches! Our mouths by this time were agape. I needed more food!
We had pre-ordered a toasted sandwich and hot drink – to be served on The Second Sitting. I had no idea what the second sitting was. This occurred about 1 and a half hours from our landing destination.I smelled aromas of food heating somewhere back there, amid rustlings and coffee gurgling and much activity. That delight of toast, ham and cheese and a paper cup of delicious aeroplane filtered coffee, went down a treat. It uplifted. Sleep had eluded me again. This was an overnight flight. We would arrive at 6.am in the morning – of the same day we left. I tried hard to doze. I scrunched, twisted, turned and thrashed, all wrapped up in my Jetstar blankie. It was all in vain. Instead, I watched the flight map through bleary eyes, the little figure of our plane nearing it’s destination.
Outside it was pitch black, the only sight visible, the lonely red blinking light on the wing tip.

As our descent began, my ears popped but not as badly as on previous trips abroad and that excitement flared again. A different vista appeared outside. The twinkling, sparkling lights of Honolulu. Like a magic carpet, spread out before me, along the edge of the ocean. Like Paris, without the Eiffel Tower. Wonderful. What a treat!

We had 3 pilots on this flight we were told. The Captain. The Second Officer. Plus a trainee.
With a white knuckle clamped to seat, bumpy, hard landing, perhaps they decided to give him a go. Hello to you my glorious friend . Hawaii.