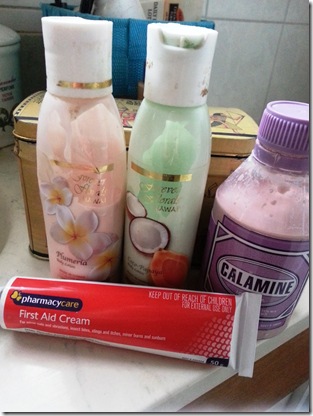 On a warm Spring evening, when you slather your body lavishly with sweet, highly scented papaya coconut and lotus like -blossom lotion you bought in Hawaii quite some time ago because it reminded you of the scents and sights – and you neglected to toss it out!

Thinking ” Oh, this still smells nice “! Maybe that exquisite Dune by Christian Dior lotion I’m looking at suspiciously now will also have to go! Plus some other past- their- use- by -date beauties. Also that one that gives your skin an attractive fake chemical glow….Somehow Sorbelene doesn’t cut it!

Those ABC shops are a fragrant magnet!

It began with itchy palms. Yes. Palms of the hands that itch. I had just purchased The Halloween night lotto ticket. Doesn’t having itchy palms mean money, lots of money, is coming? Well, it did come – out of my dwindling pocket as I attempted to buy relief from the plague-like symptoms which were now bursting alarmingly across areas of my pre-Summer skin, following the trail where the afore-mentioned fragrant cloud of “Forever Hawaii Plumeria “and “Coco-Papaya”lotions had been administered. On the bottle it said – “ Apply generously to hands – yes hands of the now itching variety – and body to quench and moisturise “. Nothing was mentioned that perhaps, after FIVE YEARS, YOU SHOULD HAVE THROWN THE BLOODY THINGS OUT! One was pink. The other green. They were exquisite. They reminded me so much of Hawaii, their scents taking me back to an exciting, tropical heat, jet-lagged time. They were treasured, like an old book or that t-shirt with I LOVE NY on it which is getting transparent with age and countless washing.

What would the local Doctor do for me?

I presented my symptoms to the local pharmacy. I waited, patiently, for an elderly woman to finish telling her whole life story and those of all her friends, before showing my red, raised, nasty looking mottled forearm for the female Pharmacist’s inspection. She smiled fakely, not making eye contact and I swear stepped back  a little towards the drugs shelf, keeping her eye on my arm while not saying anything helpful or exhibiting any murmuring words of sympathy. I know a fake smile when I see one. That was a fake smile. $8 poorer – I exited the store grasping a tube of innocuous looking first aid cream. I wasn’t sure this was the way to go but she had offered an anti-histamine (with a skull and crossbones on it) as “ that is all a Doctor will prescribe ” she said condescendingly, looking me up and down. If the Plague was still around, I would have been carted off like a actor in that Monty Python movie.

At home, I gazed with growing horror, at the red, raised, angry looking rash still erupting over areas of my body. Legs, arms, shoulder, wherever those gorgeous lotions of the Gods had touched. A more unsettling feeling added to my anxiety as I read the label of the cream she had recommended.  Underneath the advice – “ kills germs, numbs local pain, eases swelling and redness (so far so good ), soothes the affected area ‘ was this gem.

CAUTION THIS PRODUCT HAS BEEN KNOWN TO CAUSE LOCAL SKIN REACTION. If this occurs, discontinue use and consult a Doctor. Maybe that was $8 not well spent?!

Still reluctant to visit Doctor, Pharmacist number 2 was approached. At least he ummed and ahhed over my symptoms, nodded sagely,showed some interest, making eye contact – does it itch? Only my palms I said. No, it’s not excema, no it’s an allergic reaction. You should throw out the lotions, he said. Already done, I said. Although it was difficult, I was attached to them you know. He nodded most sympathetically. More uumming and aaahhing.  He produced another cream. It’s the strongest you can get without prescription, he said. You are now sensitised so dont use anything, no soap even, nothing but this cream twice daily. Now $10 even poorer, I went home to begin treatment. Why was there a leaflet inside, about 4 pages long, describing the reasons I should not use this product!? Yes I do have sensitivities, no I am not pregnant, nor do I intend to be, nor will I be applying it on my face, in my eyes or on my genitals! I don’t know if I have ever had a reaction to the ingredients ! What was in this stuff?  That unsettled feeling returned.

Just one application on a test patch on my leg proved that yes, maybe I have had a reaction to the ingredients. IT BURNED. On my leg, like fire. It made the area look worse than before, redder, angrier, BURNING. I stopped using it.

The rash remained. Although, over time it appears less angry looking. I think the last cream BURNED it permanently into my leg. For that alone, a Doctors visit may well eventuate. Because I’m allergic to the treatments!

In the past I have discovered those simple baby remedies from the local supermarket, for nappy rashes or nipple irritation, to be quite effective so maybe I’ll spend a little more on ingredients like chamomile or natural ingredients and trust that letting Nature take her course is the best option.

A word of wisdom. Be vigilant on use-by-dates and what you are putting on your bodys largest organ – your skin, that is!