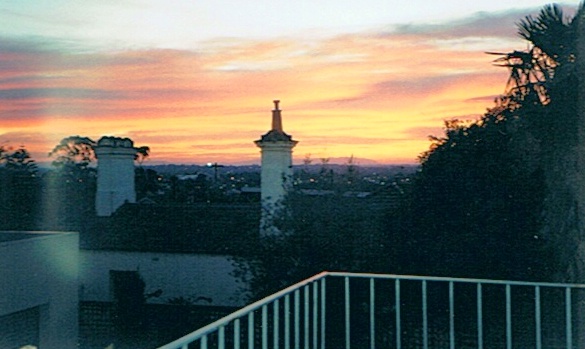 Gwen was our neighbour.

We had purchased a brand new two storey townhouse in inner-city Northcote, perched high on the hill, with sweeping views from the balcony to the east with the Blue Dandenongs a prominent feature. The view encompassed the roofline  and chimney of the house next door, a bluestone Federation style home with an original slate roof which except for moss was in good condition. There was a heritage overlay on the front. I was to find out this house was 100 years old.

I would head out on the tram from our apartment in Carlton to our new townhouse and peer through the window into the wide empty spaces with newly polished golden floorboards, where the sun shone through as it swung around to the west and imagine our life here. With the key finally in hand, I would let myself in and pull the weeds out from the little garden beds at the back, leaving them in a pile, to dry and wither in the heat, until the time came when we would have gleaming new garbage bins delivered. The gardens had been landscaped and planted already and I was to transform my little courtyard garden over the years to be unrecognisable. A haven.

Prior to moving in officially, I was standing on the upstairs balcony, gazing at the view across the rooftops. A lady with a frilly apron entered the common driveway. She was diminutive, with a perm, she looked like someone’s Nanna. She noticed me there and smiled up at me. “ Are you going to buy it “ she asked. I hesitated before replying that yes we were about to move in. After all, I didn’t know her. That was my first meeting with Gwen.

For the next twelve years, my encounters with Gwen would not always be positive. However I developed a routine.

Every morning, through all the seasons, through all weather conditions, I would wake early ( being an early riser ) and stand at the bedroom window and watch the greyish white smoke from Gwen’s little chimney at the back, curl and twist its way rising into the sky. I only got to see her little kitchen with it’s tiny wood stove at the auction of her house 12 years later, which was the first time I had crossed the threshold. It became my way of looking out for her, I knew she was up and about as, like clockwork, she got that fire going every morning.

There were many wondrous sights seen from that balcony of ours.

The sun rose, every day flooding the room with red and golden light, a preview of what the day would bring, the sign to close blinds against the heat  every Summer. Hot air balloons were a regular occurrence, always in the early morning, as they made their way towards the City, sometimes coming so close, we could see the people hanging over the side and hear the whoosh of the gas burners. Many mornings I was woken by that sound. We would wave and it was always a thrill to get a wave back and see their excited faces. The nights where storms lashed the inner City, had me amazed at the forces of Nature as jagged bolts of lightning penetrated those glass windows,lighting the room up as if it was day, causing me to cower under the doona and block my ears and eyes. Of course, there was always a full Moon to cast her illumination into the room, flooding across the bed and I would look right into her heart. Forever after, I have had a fascination with her, a Moon themed room, a part of any house from now on.

Through all these sights, the one constant, regular and a reminder that she was present, was the sight of the smoke from Gwen’s chimney next door.

She was not an easy person to get to know but somehow I felt the need to keep an eye on her. I had an elderly Mother too. From the brief conversations we had together, I had a picture of a single elderly lady, no family except a vague reference to a sister, no children. She did not invite friendships or close confidences and I was never once invited in. The fact that builders had invaded her privacy whilst constructing our home, using her water and treading through her garden, leaving her with drainage issues, did not bode well for her new neighbours – us. She told me of her inconvenience more than once.

Some days, whilst walking High Street, I would bump into her, pulling her little shopping trolley to the local shops. She must have been well into her eighties and still doing that trip. Every Christmas or Easter, I thought of her, alone in that big house and would open the little swinging gate to negotiate my way through the overgrown garden, up the steps to the verandah and her front door. She would open the door, sometimes still in her dressing gown. I would keep an extra packet of those home made Easter bunny shortbreads and pass them to her ; she would smile and thank me. She said her rooms were messy, she tended to live in only two rooms, the bedroom and the little pantry like kitchen at the back. It reminded me of the servants’ quarters from a tv serialization when I finally got to see it. There was a long, long hallway down the centre of the house, with various rooms leading off, kitchen at the rear. When she opened the door, that was the view   I got – no further!

She told me of the day “ they “ took the car keys from her. It was a little, ancient Morris minor from recollection. I was quiet and sympathetic but I had seen her driving so perhaps it was wise. I never knew who “ They “ were. She would talk of the neighbours across the road who had a new baby, I would tell her of my family in conversation. On one occasion she took me to task out on the street. I had put my bin out – in her spot. I explained that it was legal being on my side of the fenceline but she would have none of it. I flounced off that time, dragging my bin to another position, leaving her still standing there. Our only altercation. I believe it upset her.

The years went by, Gwen became a little frail. When I saw her now, she looked older but she still did her own thing. She told me she had worked all her life to ensure she could support herself. I admired her.

One day, at the balcony windows, I noticed a change to the familiar scene. There was no smoke coming out of Gwen’s chimney.

At this time, another person had appeared. A relative. Gwen’s niece. I met her outside and asked her what has happened to Gwen. There was no smoke, I said.

Apparently Gwen had suffered a fall and had been placed in a home. I had a bad feeling about this. Gwen would hate being there. She was independent, had been her whole life. She was born in that house. I had an old photo someone had given us of children playing in the dirt road out the front,in the 1800s, dressed it seemed in formal dresses, all lace and pinafores, with the Dandenongs and Gwen’s house clearly visible in the shot. She had said that our house was built on the remains of a former backpackers mansion which burnt down  quite some time before we even knew of it. We often wondered about the history as in our time living there we two, along with a family member, distinctly heard our names called on three separate occasions. Greg came running down the stairs at one time, to ask, annoyed at being disturbed, why we were calling out for him. Blank looks ensued. We all had the same experience, a voice clearly calling our names – when no one had…..unexplained.

Gwen’s niece kept me informed on things. I brought the bins in and kept an eye on the place. The house next door took on a melancholy appearance, or was it simply how I was feeling? I had never heard Gwen speak of other relatives. They had never visited her before now, I was certain. We offered to go see  her to be told “ she wouldnt know you “. Wouldn’t know us? She was a feisty, independent woman, with a strong outlook on life. We didn’t believe she had deteriorated so quickly since being taken to a facility. In hindsight I learned that is not so unusual. We didn’t go to see her. We wish we had.

It was a mid morning phone call from her niece, which brought the sad news that  Gwen had passed away. I couldn’t believe it. Her house empty, locked up, the 100 year old tree in the front yard, dropping its leaves as if recognising the loss.

The next day or two later, I stood at the balcony window, as I had so many times over the years, looking out over the rooftops, Gwen’s rooftop to the little chimney at the back. For some 20 seconds perhaps, I stared in silence and disbelief –

at the smoke, pouring out thickly, twisting lazily as it made its way upwards into the heavens. I was lucky that Greg was in the shower of the ensuite, because he says to this day, he would not have believed it. He was most reluctant to have to emerge, dripping wet and make his soggy way to the window. We both stood incredulous.

A dash to the phone to call Gwen’s niece. Was there someone in the house? She assured us that was not possible and personally made the trip out to check. No-one had been let in in that time frame. The house was locked up securely and empty. Greg even went over to peer inside. No sign of life.

I went to the auction and stood in the crowd. The house was open so I was able to walk through. The rooms were all empty, only for a little single bed with a pink quilt and a framed photo of Gwen on the mantle. That long, long hallway led to the little old fashioned kitchen, now crowded with interested sight seers. I was in a 19th century time warp, old wooden built in cupboards, dark and forgotten, dark empty corners– and a tiny wood stove – where I could see a little lady warming her hands as she heated the teapot every morning.

I couldn’t look at the smiling grins of the relatives, whom we had never seen in the twelve years of being Gwen’s neighbours, as the auctioneer announced the sale. It seemed wrong somehow.

We believe Gwen wanted us to know she was ok. There was no other viable explanation for what we saw and we went through them all.

It is not the only time we have experienced such things…

Tell us about your experiences, have you had unexplained events, personal encounters which have no explanation.