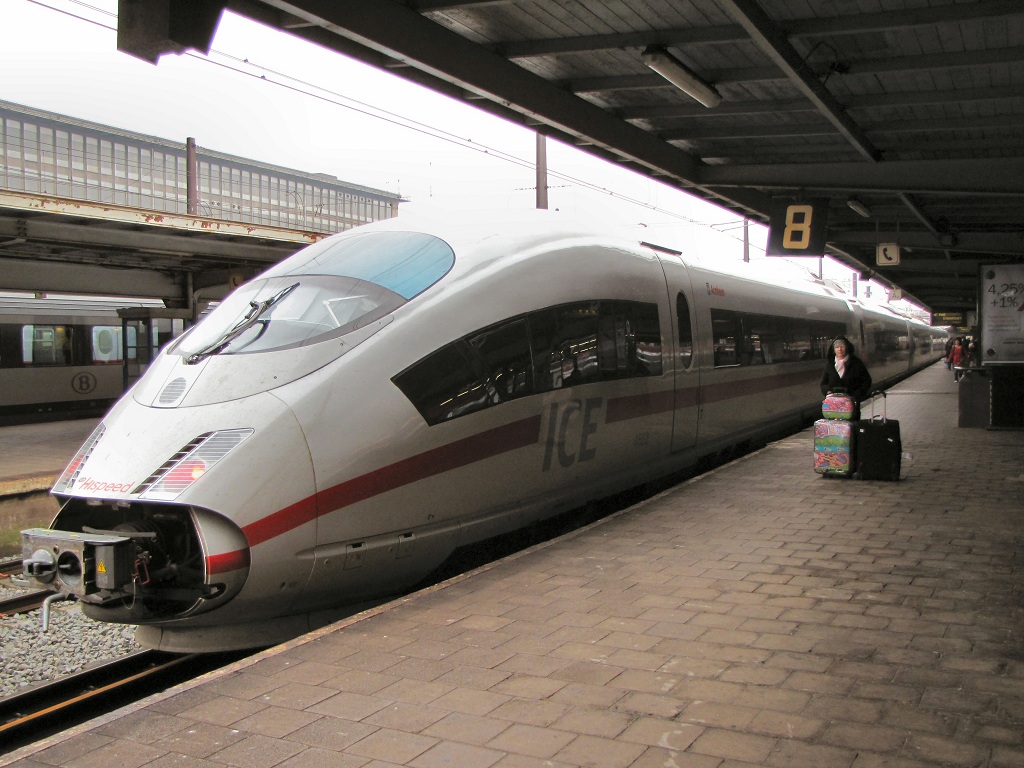 After a long drag to the platform, we didn’t even glance at the train sitting stationary in front of us.

Our train. The posh female checking tickets for the train to Brussels, haughtily let us on after glancing suspiciously at our Rail Plus print-outs. Those tickets were causing us some grief as we traversed foreign countrysides – always forgetting to sign them.

A relatively short journey as this train travels over 200kms per hour. I remember squeezing into the tiny and claustrophobic toilet – both of us – together – as I refused to go in alone, such was the claustrophobia it engendered.

On alighting at Brussels or Bruxelles, we noticed Eurostar. The posh woman had deigned to allow us onto the Eurostar! Not sure if we came in at Brussels-South or Bruxelles Midi or even if they are one and the same. All train stations begin to look the same after many kilometers of travelling.

A modern station with loads of light streaming in, trendy up to the minute shops, food and ATMs. Not too crowded at this time of day but outside was very different. The cold was biting, plus it appeared to be getting darker by the minute. We felt like tourists, We stood out like tourists poring over a map as we were. Naturally this attracted an itinerant beggar. One of many encountered on our travels. I became quite adept at discouraging them – with just a look! Enough to make them slink away into the corners.

This was a city which felt unsafe, foreign, strange and so far from home as we were, a darkness not associated with the time of day now descended as we searched for our Hotel La Grande Cloche. Is that French? Isn’t cloche a hat? There were tram tracks to negotiate, dragging those designer suitcases, wheels bouncing and getting stuck in ruts and sidings. Men. There seemed to be quite a few men glancing our way, eyes meeting just a second too long, enough to make me uncomfortably aware. I pulled the hood of my warm woolen coat, Bought in a French market just a few hours ago, down over my hair, my very blonde hair!

The Hotel appears out of the encroaching darkness, on the edge of a square with a fountain in the centre. Ten minutes walk from Brussels South train station with its Eurostar Terminals. Set in a 19th C building on Place Rouppe, in the heart of Brussels. Described as trendy and upbeat, it has a pleasant facade and rather La Grande architecture, planter boxes adorning either side of the entrance. It is still the oldest operating Hotel in Brussels. We grab the key from a friendly English speaking male receptionist and take the lift to the 2nd floor.

The corridor is narrow, carpets ordinary and heavily marked (with what?). We groan at the sight of a hairdryer attached to the wall over a sign SHARED TOILETS, WC AND SHOWER! Hadn’t we asked for our own shower? Inside, to our relief, we found our very own shower, within our very own bathroom, complete with bidet! The bedroom is large, with curtained views to the Grand Square, traffic moving slowly around. The flashing neon sign outside the window is non intrusive. The warmth of the room makes us feel glad to finally be inside. We want to stay in.